Lanny beat me to the punch for releasing our monthly dividend income summary and lets just say I have a tough act to follow.  $1,100 in total dividend income and a 30.31% dividend growth rate…impressive numbers Lanny!  You are crushing it.  However, the show must go on here and luckily for me, I had some nice year over year growth as well.   Time to peel back the layers and take a dive into my June dividend income summary!

This month I received $447.03 in dividend income, which represents a 56.58% dividend growth rate from the previous period!  At least I beat Lanny in the dividend growth rate category.  Below is a detailed breakdown of the individual companies that paid me a dividend during the month and some observations about the month! 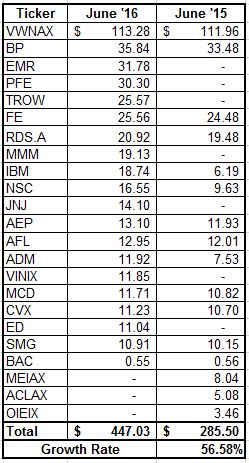 Woah that is a long, growing list of companies!  I received dividend paychecks from 20 companies and mutual funds this month…aka 57% of the holdings.  Just goes to show you how top-heavy the third month of every quarter is.  I mentioned above I had some observations about my month, so here they are:

On a technicality I received one dividend increase this month.  As Lanny pointed out in his article, Target announced a 7% dividend increase during the month.  However, I did not actually own TGT at the time of the announcement and purchased shares in the company a few weeks later.  For fun though, I’ll pretend I received an increase to avoid putting none in this section.  June just isn’t a popular month for companies to announce dividend increases

Comparing my dividend income to the previous year is always a humbling experience for me.  You forget how quickly each move you make, each dollar you save, and each dividend increase impact your dividend income.   We are so focused on the individual transaction level that it is easy to forget how much has been accomplished over a longer, 12 month window.   The amount of new companies that paid me income this year compared to the last serves as motivation to keep on grinding, saving every dollar possible, and getting that dividend income rolling as soon as possible.  Now, that June is over, it is officially time to kick off the second half of 2016!  LET’S GO!

How were your months of June?  Do you own predominately dividend paying stocks or mutual funds?  How many new companies paid you dividends in June 2016 compared to June 2015?  Did you set a record this month?