Lanny and I have talked extensively about our disdain for owning a car, forking over a monthly payment for a depreciating asset, and dealing with all the random costs and annoyances that come with owning a car.   Well, a half a year ago, I caused some self inflicted damage to my car and have a massive dent to show for it.   This time, I drew a line in the sand and determined I am not spending my hard earned money for the repair! 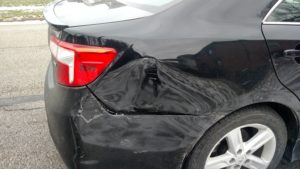 How Did It Happen?

When I moved into our current duplex, I noticed that a portion of the dining room was wider from the rest of the house.  This extra portion occupies some valuable space on our already narrow one-car driveway that my wife and I share with the other tenant.   To protect his house, our landlord installed two metal poles on each side of the dining room to protect his investment.  For the longest time, I thought it was ridiculous.  Surely this was overkill, right?  Unfortunately, I learned the hard way that those metal poles play a very critical role in protecting his investment from tenants like me.

I’m not a morning person and I usually struggle to put a coherent sentence together before I drink my morning cup of coffee.  One day, I was backing out of a driveway and I became distracted.  No, it wasn’t my phone.  I am usually pretty good about not using my phone while driving.  This morning, I was fixated on the new car my neighbor purchased and was trying to figure out what type of car he bought.  Yes, I was laughing to myself about how expensive cars are and how I hate the fact that I spent so much money on mind.   After driving for over ten years, I aligned myself while backing out and began focusing on my neighbors car instead of my own and made the assumption that I could remain aligned while solving this un-important mystery.

CRASH!  Yep, that was the next sound I heard.  It turns out that my car started veering off course and I was not paying close enough attention to realize I was slowly heading towards those worthless metal poles.  Oh the irony.  Now, I fully understand why my landlord installed them and I respectfully agree with his decision to install them.   Luckily for me, I was going very, very slow.  So the damage was not that terrible.  However, I now have this really ugly dent close to my tail light and bumper.  The bumper was still attached and my tail light was still intact….I was very very luck and I know the damage could have been much worse.

Why am I not fixing it?

I’m not a car person nor am I very handy.  But are there really that many Jewish people that are?? (Kidding, kidding)  Fortunately for me, my mom’s boyfriend loves cars and knows a lot about them.  So the first thing I did was call him and shamefully admit what I had done.  He re-assured me that I was lucky that the damage was not worse because if I broke my tail light I would have been legally mandated to repair the damage and I obviously couldn’t drive if the bumper was detached. And neither of those repairs are cheap.   My next line of question focused on potential long term damage to my car and the ramifications of not paying for the repairs.  After an in-person inspection, he once again told me how lucky I was and that the risk of the boneheaded accident  causing serious damage or accelerating rusting was very low.  His final advice was if I can live with the damage and the eyesore, I didn’t need the expensive, multi-thousand dollar cosmetic repair.

My decision…OF COURSE I’M NOT GOING TO FIX IT.  If the repair is cosmetic, will not impact the life of my asset, and will be expensive, why on earth would I spend the money?  It hit me a while ago and my feelings about it have accelerated a lot recently…but who really cares about the appearance of your car?  Who cars if there is a dent?  I have driven it plenty of times for work and I have not had one co-worker or client complain to me.  In my opinion, this repair is a sunk cost.  It is funny, I feel like I would be angrier looking at my repaired bumper that cost thousands of dollars to fix versus a dented bumper that I never had to repair.

When I was making my decision, I realized what was most important to me.  To me, I would rather save as much as possible and keep on growing my dividend income or paying down our student loans.  Focus on building assets that appreciate in value or focus on relieving yourself of expensive debt.   That’s the name of the game and we say it every time here…EVERY DOLLAR COUNTS.   Every thousand dollars I spent repairing my car was about $30-$50 less in annual dividend income going forward.  This repair could have cost me triple digit dividend income if the repair were as expensive as my mom’s boyfriend was describing it to be and I would be that much farther away from achieving my dividend income goals for the year.   That is a trade-off I was not willing to take.  Not for a cosmetic flaw in an asset that I barely want to own.   That my friends, is why I am never going to repair that ugly, eyesore of a dent in my car!

Going forward, I am going to start evaluating decisions with a similar mindset.  Is the cost really worth it?  Would I make that decision to spend again a few months from now?  Do I really need what I am going to buy?  Well, that’s the plan anyway.  Seeing a situation like this will always help me focus on saving and serve as a great example when I’m questioning myself about whether I need to spend or can forgo something expensive!

What are your thoughts on m situation?  Would you have spent the money and repaired your car?  Would you even own a car if you didn’t have to?  Has a situation like this happened to you before?