Throughout the life of our blog, Lanny and I have searched and slashed our way to save as much as possible to invest in the market NOW.   Even though we have tried to identify ways to save through battling with our phone/internet provider (nice job Lanny!), tried to make our football season more enjoyable at a cheaper price (Can a football season be enjoyable as a Browns fan?), or just finding random savings “life hacks,” there is one expense that we have flagged as a major liability…I mean…money pit… our cars.   A car is a necessary evil in the Midwest that does nothing but lose value and cost you money.   Sadly I am writing this article, so that must mean something happened to my car.   Let’s see how my car took a little extra money out of my savings account this month. 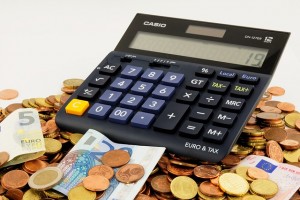 What Happened to My Car?

What happened to me was different from what happened to Lanny, who suffered a flat tire and had to replace his brakes and rotors.  Luckily for him, he his relatively handy and was able to score some awesome deals on the parts he was replacing.  This allowed him to minimize his savings and reduce the impact to his bottom line, which is crucial in our monthly quest to save 60% of our income.   No, my event was different and it was just a stroke of bad luck.  I was in the wrong place, at the wrong time.  The worst part, I had zero control of the situation.

My fiance and I woke up one weekend morning and had a sudden urge to make coffee and cinnamon rolls for breakfast.   Doesn’t that sound amazing on a nice chilly, fall day?  Especially considering that Starbucks sells bagged coffee and it would be a perfect complement to investing in their stock! The problem was that I didn’t have either of those ingredients, which is shocking because I drink a lot of coffee and usually have some in my pantry, so I had to run to the grocery store.  In my head, I was expecting a quick trip in and out of the store.  After all, I only needed two items and I knew exactly where they were, so I didn’t have to spend my time hunting them down.   While I was standing in the checkout line, I heard an announcement begin over the loud-speaker.  “WIll the owner of a black Toyota Camry please come to the front of the store?”  At that point, I knew I was toast.

After I checked out, went to the service counter and I was informed by a few individuals that my car was hit by a guy trying to pull into the parking spot next to me.  I was very fortunate in the sense that there were multiple witnesses who helped me ID the man who hit my car and would not leave without knowing that I talked and exchanged information with this person.  It was a very kind act by these people and I cannot thank them enough.  Once I told people about this story, I began hearing about others experiences where they could not ID or pinpoint the person who hit their car and they were out of luck.  As I said before, I am thankful that was not the case.  I began exchanging information with the man and we walked out to see the damage to both our cars together.   Walking out, the shaky, older gentlemen told me that he was trying to park his car in the spot next to mine and gave my rear bumper a nice smack.  I don’t know what he was thinking trying to pull into that spot because there was no way his massive old Trailblazer was going to fit into the spot.  However, I thought it was better just to keep that comment to myself.  I took a couple of pictures of his car, my car, the scene of the crime, and took down the name/number of a few witness.  We were both on our way and honestly, at that point, all I wanted to do at this point was get home and make my cinnamon rolls. 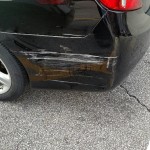 Beginning of the repair process

This is where the story starts to take an expensive turn.  After I brewed my coffee and make my cinnamon rolls, I decide to give my insurance company a call to file the claim. They informed me that I will have to pay a $250 deductible based on my insurance policy but recommended that I try to file a claim with his insurance company  so that I won’t have to incur this cost unnecessarily.  I was pretty excited and thought that my insurance company was looking out for me!  Really though, I’m sure they were just trying to avoid this headache.  After this experience though, I can’t blame them.   My next move was to call his insurance company and begin the process of filing the claim through them.

A few days after filing the claim through his company, I started to receive calls from the guy who hit me asking to settle this expense outside of insurance.  The idea intrigued me and I was willing to listen when we spoke for the first time. Much like Lanny, I hate paying an expensive auto insurance bill each month so I am always open for creative solutions to a problem involving that industry.   The calls started to come frequently and I have probably received 20 calls from this guy since the accident.  For my sanity, I just stopped answering.   His plan was to sell me on settling this outside of the insurance company and he would pay for my repair if I went to the mechanic he knew….not a chance!  If I am settling this claim, it is going to be on my terms with an auto body of my choosing.  He owes me…I’m not playing by his set of rules.   After about the 8th call, I started to get suspicious of his intentions and I gave his insurance company a call to check on the status of the claim.  The news was not great, and they mentioned there was a hold up in the claim and it may take a while to settle.  While my side of the transaction was rock solid, his side of the transaction and support system was starting to crumble.

With that call, my trust for the guy went completely out the door and with that, so did the option of settling outside of the insurance companies.  With how expensive it is to repair a bumper, I can’t put my faith in a person who I have never met, has hit me, and is working tirelessly to do everything he can to make sure I don’t go through insurance.  No thanks, this sounds too fishy and suspicious for my comfort.  Unfortunately, unlike the scenarios that I mentioned Lanny experienced with his car earlier, it is much harder to buy a bumper online and replace it yourself.  I definitely don’t trust myself to do that and want a professional taking care of that.  So the other day, I called my insurance company and informed them that I will proceed with the claim and fork over a $250 deductible when needed.  From this point on, they will handle collecting the funds from either this guy or his insurance company.  If they pay, my $250 deductible will be refunded.  If not….well, that’s no longer my problem.  Situations like these and the frequency in which they occur make me think investing in a company like Genuine Parts Company would be a great idea!

I hate having to incur the expense, but I don’t want to handle dealing with this on the side.  I guess this is why you pay for car insurance though and incur that ridiculous expense (Now that doesn’t mean I don’t want to reduce my monthly insurance expense).  It can save you from paying large out-of-pocket expenses when unexpected events like this happen.  You never really know what can happen at any given moment, even if it is for something as innocent as going to the store to buy coffee and cinnamon rolls.  If I were hit by a person like Lanny or one of you in this wonderful online community, it would be a different story.   But I couldn’t establish trust with this individual and that was the difference between settling outside or incurring this expense.   I took the safer and secure route in this case and while it was more expensive, it feels great knowing that this is going to be taken care of and the burden is not on me.

In hindsight, I find myself laughing.  Who would have thought that last weekend I was going to pay $250 for a pound of coffee and a pack of cinnamon rolls?

Thanks everyone for listening to my story here.  Have you run into any situations like this?   What would you have done in my situation?  Were there any other solutions that you thought I should have explored?  Any tips on how you have managed to reduce your car insurance?   Are you just tired of sinking money into this four-wheeled money pit as Lanny and I are?