Time to bust my hands out of one set of shackles.  After 48 months of owning my car, with “strings” attached to them, I decided to snip that little thread to be free and clear.  I remember every so often, I would look back and think, “I should have never bought my car and taken a loan out to do so”.  Well, at least now I have decided to at least take out the last part of that statement there.  Goodbye Auto Loan!

Back in July/August of 2013, I thought it was a great idea to buy a car.  Everyone was buying a car, Bert, another close friend at work, a few relatives, the list goes on.  My Toyota Celica (1997) had almost 215,000 miles on it and I didn’t feel as safe as I once had in the car.  After a month or two of research, I stumbled upon my good old Honda Accord (2010) that had 43,100 miles on it and financed the car, with no money down, at a rate of about 2.29%.  At that time, that was a damn good interest rate for a used car.  However, I made a decision to stick the loan out for 66 months, the max I could go without altering the interest rate.  In short-form, that is 5 years and 6 months.  How insane was I to preserve capital for other investments at that time?  Even my girlfriend’s auto loan was only 36 months and she even paid that off a few months early.

I was determined, earlier this year, after months/years of b****ing about the auto loan and how I wish I never had it, to get rid of it, methodically.  I wanted to rid the handcuffs that were shacked on me, every time my hands gripped the wheel.  I wanted one less thing to worry about, one less website that was in my “Finance” bookmark folder and to see one less outgoing cash flow on a monthly basis.  I don’t want to owe anyone anything and this was a challenge I was taking out.

From that point in April, I set up my Auto-Loan debt repayment plan to be set for 6 months in order to be completed by end of September.  Keep in mind, my auto loan was to be completed by February of 2019 (YIKES!), therefore, if completion by September of 2017, I would shave off 17 months.  This would save approximately $105 in total interest as well, not the greatest return/savings, but money saved nonetheless.

I knew that it would take quite a bit of capital to rid the loan in 17 less months than originally planned, but I decided to say screw it and Just Go For It.  As we have posted, the Side Hustles have helped bring in a few more extra dollars to be used towards this loan as well, making it “easier” in a way.   However, the stock market was showing less signs of opportunities (to note, there always can be value found!), and I wanted to make use of my capital in some way, shape or form.  In addition, having my auto loan currently does nothing for me (at the moment) from a tax-benefit perspective.  That is what made this the more logical move.  Further, and not the least reason, a car is a depreciating asset that is beneficial if it is able to get you from point A to point B, in my book.

Therefore, instead of paying in 66 months, I wanted to finish this off in 49 months, or just a tad over 4 years, instead of the almost 6 years.  This would further open up $284 per month in new cash flow over that time period, as well and could have potential in a reduction of auto insurance.  I am very excited to making Every Dollar Count in the pursuit to financial independence, and this was a stepping stone here.

Without further-ado here are the screen shots below, showing my defeat of the auto-loan in August of 2017 (one month earlier than my goal).  I was able to defeat the opponent in 48 months, shaving off 18 full months from this “relationship”. 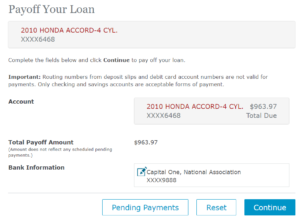 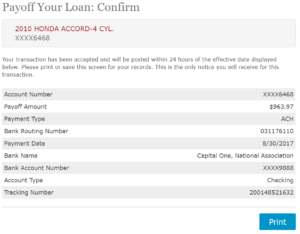 Going forward, I plan to have my car, if no destruction of the car happens, for another 5+ years and if possible, at least 10.  I have been able to reduce my driving to around 700-800 miles per month vs. my previous ~1,500 miles, due to renting cars for work purposes when traveling (vs. driving my car).  In addition, I have battled with the question on the best use of unlocked cash flow and it becomes quite simple.  I am going to invest when there are opportunities, if no opportunities I see exist, I can stack capital or potentially pay down the mortgage (always the question/debate!).

I am gosh damned excited about putting this to bed and to rest, and to now have an even bigger savings target with a reduction of this outflow of cash on a monthly basis.  Auto Loan, we are done and I hope to NEVER see you again.

Now, has anyone else gone through this same scenario?  Would you have done what I have completed?  Are you currently hating your auto loan situation and have debated doing something about it?  Please comment below or shoot us a message on twitter for your thoughts!  And, as for this article, good bye auto loan!