We had an insane month of May, no questions asked.  We bought a house, we attended a couple of weddings, and traveled to Boston for a graduation.  A lot going on!  If you recall, in what feels like forever ago by now, I wrote an article about how we were also going to have to purchase a car for my wife since her lease was set to end in May.  So on top of all of it, we added buying a car to the mix!   This time, something was different, we changed our plans at the last second and decided to purchase our first ever used car.  Now, here is the “thrilling” story about one of my least favorite processes ever, buying a car. 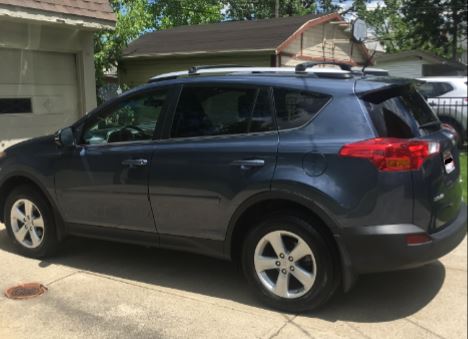 Searching For the Right Car

I wrote about our thought process about buying my wife’s next car in an article released slightly over a month ago.   To summarize, we decided that we were going to finally break the leasing cycle.   My wife and I compromised on the fact that the car had to be newer and have updated bells and whistles.  I thought this was a reasonable request given the fact I as asking her to find a car that she was going to own for 10+  years.  Our final three contenders were the Toyota Rav-4, Subaru Forester, and the Honda CR-V.

We were being stubborn and waiting for the “great” Memorial Day sales, given the fact that the holiday was surely to bring out the best of each car dealership.  Over the last month, I had started leaning towards purchasing new.  I thought that if the Memorial Day specials on a new car were close enough to a used car, then it would make more sense to purchase new verses used.  Specifically, one of the Toyota dealerships kept telling us about how great their new car deals were going to be AND that they offer 0% financing to all new college graduates.  The 0% financing would have been a game-changer if the price to was close enough, and that would provide a large enough swing where the economics could work out towards a new car.

Well, Memorial Day arrived and the car dealerships started announcing those “great” specials that we were patiently waiting for over the last month.  After shopping every dealership in the neighborhood, the lowest payment offer we received was $450 dollars per month plus tax.  Sure, it was 0% financing which I loved, but that was still a lot of capital to be deployed over 60 months.  That number came in much higher than I expected, and it left me searching for a new answer to this problem.

I also had some slight sticker shock when running through our monthly finances considering a $450 monthly payment.  Remember, we just purchased a house, so our monthly expenses were about to shoot through the roof.  Was adding a new car, on top of a new house + expenses, really the prudent thing to do?  Heck no.  After I calmed down from all of this, my wife and I had a pretty serious heart to heart about considering a Certified Used car.  The pros were that it would allow us to use the cash to help further improve our new house, vacation, and so on, all while driving a still newer car that has some miles on it.  Plus, having a cheaper car would result in less taxes upfront (which would be nice considering our county’s’ sales tax is 8%) and cheaper insurance due to the fact that the value of the car is lower.  A lot of pluses were swinging in our favor and the momentum was turning.  The used car would have the features she wanted, just an older model with a slightly higher odometer.  Our discussion was honest and great, and we left with a decision.  Goodbye new car, it was nice knowing you.  We were set on purchasing our first used car.  The compromise had been made and I began actively scouring the certified used market for a Rav-4.

The 2014 Rav-4 presented the best opportunity to get a deal without sacrificing too much.  It was the same design as the new model, just without the refreshed electronics.  But otherwise, there wasn’t a difference between the two vehicles.  For a new car, the post sale price was just under $25,000.   Certified Used 2014 Toyota Rav-4’s were selling in our area for anywhere between $18,250 and $20,000 for a car with greater than 30,000 miles on it.   Think about that discount and savings right there.   I swear, I think I called every dealership within 150 miles to see what used cars they were offering.  Finally, after several hours, I found the one that we wanted to target.

Online, there was this 2014 Rav-4 XLE with AWD that was listed at $18,950 with 38k miles on it.  The Carfax was clean and it showed that the owner had leased the car and the vehicle serviced every 5,000 miles.  There were no major accidents reported and the only blemish on the Carfax was that there was minor “damage” repair.  When I talked to the dealership and our insurance agent, they said that this was nothing.  Heck, they even dropped statistics/lines such as “1 in every 4 cars have minor damage” and our insurance agent made me laugh by saying “We would be out of business if we concerned ourselves with every piece of minor damage reported on Carfax.”  Once we had those discussions, I was very comfortable with the guts of this car.

The “fun” part ensued, the negotiation.  I knew that the car was already selling at amounts way below the current listing price for comparable based on the research I had done over the last week and CarGurus.com.  Their website showed that this was at least $1,500 than others selling in the area.  Also, when I discussed a similar car with another dealer, he told me that the online listings weren’t up to date because they had sold that Rav-4 for $18,250, which was their auction price, just because they needed to move the car off their lot.  I trusted this dealer because he really had no reason to lie to me about why he just sold a car to a stranger and it wasn’t available for me to buy.  Leaving my research, I knew the price that it was listed was great already and there was still some room to negotiate.

First, the dealer offered $300 right out of the gate based on an online coupon they were offering.  Great!  Thanks for the extra money.   The dealer presented me with the terms and after all was said in done, the loan would have been for $20,350.   I looked at the sheet, and asked them if they could reduce the price another $350, so that the final loan was a flat $20,000.  But in my mind, I figured I was saving another 8% of sales tax, so accepting an additional $350 off would result in another $28 in taxes saved.

As I asked, I had two lessons from this blog circling through my mind.  First, every single dollar counts.  Heck, every dollar I save here can help elsewhere or can lead to a few extra dollars that I could invest in the market.  The amounts I asked for weren’t large, but have an extra $350 would be huge as we sort out everything in our new house.   Second, this is an older lesson, it never hurts to ask for a discount.  So many times, you simply have to ask for a discount or have a discussion and the other party will work with you.  Plus, if you don’t ask, you can’t ever succeed.  So with both those lessons in mind, I figured “Why the heck not, where is the downside?”

Of course, the dealer wanted to get a deal done, so they accepted my offer.  And just like that, the process for purchasing a new car was over.  Thank goodness.  My crazy month of May was finally slowing down.   All in all, the final price of the car we negotiated was $18,300.  Could I have asked for more off and had it accepted, sure, but I was very happy with our price and the research I had performed validated the thought in my mind that we were receiving a great deal on a vehicle that could last us another 10+ years if we maintain it properly.  We financed the purchase at 1.9% and paid our taxes up front (because I didn’t want to incur interest on taxes, didn’t make much sense to me).  When all is said and done, we will be paying $325 per month for the ext 60 months.  That is $125/month less than the new vehicle, along with the cheaper tax bill up front and the cheaper monthly insurance payments.

All in all, I couldn’t be happier with the purchase and my wife loves her new vehicle!  Another chapter in our fast-moving personal finance journey was closed.

What are your thoughts about our decision-making and our thought process?  Do you typically buy new or used cars? Would you have asked for more off than I did?