I was a little shocked, but I was able to find a quote that aligns perfectly with the message of this article.  This morning, I felt motivated to write this article because it finally hit me.  If you are unhappy with the status quo of your financial situation or are on the fence about trying a new personal finance strategy, why not take risks and go for gold? 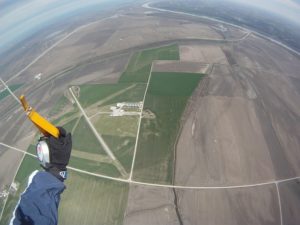 Let me explain here, because I understand I ended the last paragraph on a vague note intentionally.  In my personal experiences and I’m sure so many others out there, the fear of failure or uncertainty has prevented us from taking a risky position or pursuing a challenging financial situation. Have you ever had thoughts similar to these?  “I don’t know if I want to commit so much capital to debt reduction because my post debt-payment cash balance will be so low” or “I don’t want to ditch cable and try cutting the cord right away, what if I hate living without live sports?” or “I don’t want to trade in my nice car and purchase a used, cheaper car because of X, Y, and Z reasons?”  or “I don’t want to switch to a Traditional IRA and perform the infamous conversion later on because of the time/uncertainty in future laws that may unfold?”

I know I have had those thoughts about the extreme measures to improve my finance situation and each time I have come up with a reason for why I will not pursue the challenge.  Some thought/mental roadblock has always popped into my mind and I was able to rationalize not taking the risk and going for it all.  It sucks, I know.

But this is where the realization really hit me.  Each one of the questions I posed above all are centered on positively impacting my financial position.  They involve taking risks, doing something uncomfortable and a probably a little crazy to those who aren’t me or Lanny.   But what is really the downside here?  What do I have to lose by taking risks?  Wait, you mean I took a risk to begin contributing to a Traditional IRA versus a Roth IRA, realize the benefits now, and the government potentially changes the rules preventing the conversion steps in the future (note: hypothetical change here)?  Darn, that conversion piece of strategy didn’t work….but in the meantime, I saved a ton of money for retirement in my Traditional IRA account and save on taxes along the way.  Why is the rule change or performing the conversion in the future holding me back from pursuing this strategy?

Similarly, why haven’t I tried cutting the cord yet when my cable contract expires?  Whats the worst that happens? For two months, I don’t pay $40/month in cable and learn that I really miss having live sports at home. Because of this, I decide that I want cable again and cord cutting isn’t for me, so I price out packages and find the most affordable package.  I potentially would take a risk, save $80 along the way, and learn that I am a person that enjoys having cable.  The change isn’t permanent, so the downside of the risk is minimal.

That’s why I thought the quote at the beginning of the article is perfect.  In terms of finances, nothing is permanent.  You can recover from mistakes if you put your mind to it.  How many stories are out there about people incurring a ton of debt, waking up, and paying it off in a very short period of time. If you want to try something radical, fight through the mental road blocks and go for it?  Don’t be afraid to take that risks and shake up the status quo.   As I have learned, most of the times, our fear of uncertainty is the only thing holding us back.

Examples of Financial Risks by the diplomats

Anyway, enough of my appeal to all of you.  I wanted to provide you with a couple of examples on this website where Lanny and I have taken the risk (or are about to take a risk).

Example #1 – Lanny Maximizing 401k Contributions and HSA Account –  We all know the story now and if you want the full background, check out Lanny’s three part tax strategy and his review of the strategy four months later where he discusses why he changed his investment strategy and the tax implications of it all.  But here is the short and sweet version.  Halfway through 2016, Lanny realized he was tired of paying taxes and was going to do everything possible to reduce his tax burden by the end of the year.  With minimal amounts of pre-tax contributions and HSA contributions being made to date, Lanny faced the tough decision of sacrificing his free cash flow for the remainder of the year or maximizing his tax deductions by pouring as much capital needed into his Traditional 401k and HSA account needed to receive the maximum benefits.  Obviously, he chose the latter.

For the last half of a year, his cash account balance was low.  Extra expenses, extra trips were a battle if he wanted to incur them.  He was swag-bucking like crazy to get an extra $25-$50 per month and I’m sure his girlfriend thought he was nuts when he celebrating getting that daily goal.  He fought through it, made it through, and realized his goal.  But here is why I bring this story up.  He saw the challenge, saw what he needed to do to get there, and went for it.  Was there a chance it wouldn’t work?  Of course.  But he took the leap and reaped the benefits for it. At any time during his 6 month battle, if he found out that allocating that much of his paycheck to 401k and HSA contributions were too high, then he could have easily reduced his contribution levels to a more manageable amount.  Again, Lanny wasn’t taking a risk that would permanently altering his finances or leave him without options.

Example #2 – My Aggressive Student Loan Payback Plan –  A few months ago I laid out an aggressive plan to pay off my wife’s graduate school student loans.  This plan will see quarterly payments of about $4,000 to try her knock her debt our in six quarters, or by July 1, 2018.  Until she gets a new job and unlocks the earning potential of the degree she just earned, finding a way to fit $4,000 into our quarterly budget will be one heck of a challenge.  But you know what, we are going for it. Because why the heck not? We know it can be accomplished, but it may take a slight lifestyle change at our current income levels. If it doesn’t work, we will find a lower amount that better fits our budget.  But if it does, we will reap the benefits.  What do we really have to lose by aiming high and taking on this challenge?

Thanks everyone for hanging in there with me during my moment of inspiration!  The bottom line is that there is nothing wrong with taking risks and being uncomfortable.  One of my unofficial 2017 goals is to do more of this and get out of my own way.   But we will have more, exciting things to come about this topic in the future.  So everyone, stay tuned!

Are you typically risk averse?  Have you had any bold, risky financial moves over the last few years that you want to share?

25 thoughts on “Take Risks – Nothing About Your Finances is Permanent”