Wow.  What a month it has been.  My busy season came to a roaring close, there were an insane number of March Madness upsets, and my personal favorite, baseball season is back!  One of my favorite activities each month is sitting down with a nice beverage and aggregating my final dividend results for the month.  I tally the results throughout the month, but there is something exciting about finalizing my totals and seeing the final amount of dividend income received and calculating my year over year growth rate.  Since this is March, aka the final month of the quarter, this is a very fun activity!  Let’s see how I performed this month.  Here is my March dividend income summary.

This month, I received $891.56 in dividend income, a  22.75% increase compared to March 2017.  There was a lot going on this month, so here is a table summarizing the individual dividends received during the month. 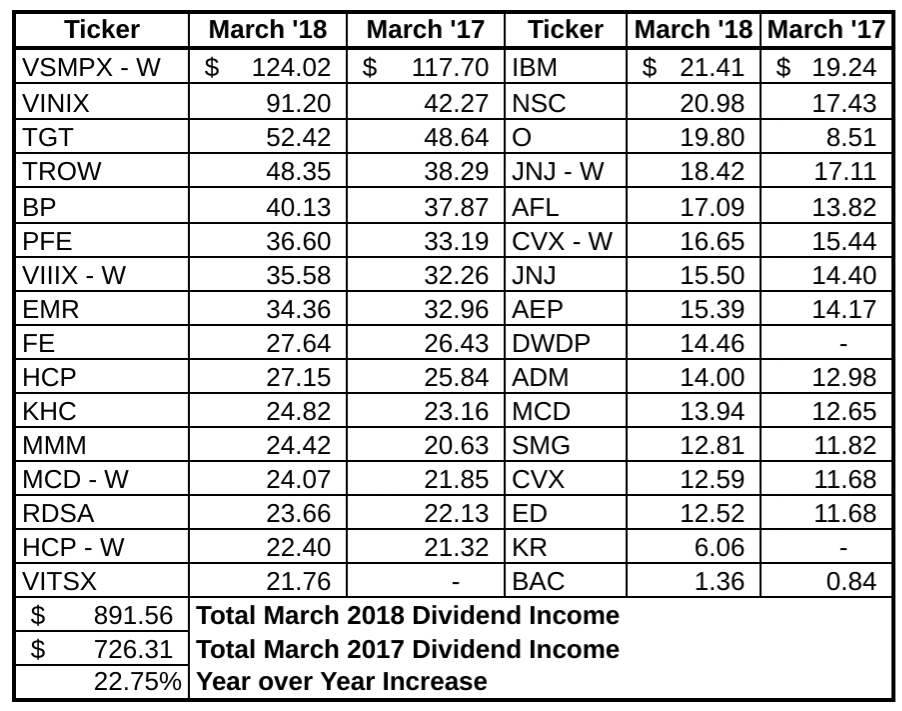 Here are some of the highlights from March:

First, the dividend increases.  January and February provided me, Lanny, and a ton of you with incredible dividend increases.  Well, in March, this slowed down as very few companies I owned increased their dividend this month.  In fact, the only holding I owned that increased their dividend was Realty Income.  Despite the fact that I added a ton to my position at the beginning of 2018, the tiny $.0005/share increase in their monthly dividend income didn’t really move the needle in my forward income.  But hey, I’m never going to complain about receiving additional income each month regardless of the dollar amount!

Luckily, I was able to add a nice chunk of forward dividend income through transactions this year.  After sitting on the sideline for almost a month, I decided to join Lanny and we both purchased shares of Dominion Energy this month.   I wasn’t messing around with my purchase this year and as a result, the purchase added $133.60 to my forward dividend income.

But things have not gone as well for my wife.  When she switched jobs in February, we had to wait several weeks for her plan to become active.  This was due to a clerical error on her employer’s part due to the fact she used to work for the employer 5+ years ago and returned with this new position.    There were some issues with Fidelity and for some reason, her account was not re-activated upon hire.  These issues were lingering for a while, but unfortunately, due to my busy season and the crazy work hours, I was not able to call and get her plan activated.    The good news is that we were able to sort this all out and she is able to contribute again.  I cannot wait to see her account grow quickly, because her regular contributions are going to be rather larger in order for her to maximize her contributions in 2018!  It should be a lot of fun to watch.

I don’t even know where time has gone during the first quarter of 2018.  But taking a step back and reflecting on everything that has gone on in my personal life and my investing portfolio, it is truly crazy to see how much things have grown.  Despite the decrease in market value experienced as the market finally pulled back, I have seen my monthly dividend income and forward dividend income continue to grow.  Adding $168 from purchases and contributions should provide a nice jolt to my second quarter results!  All in all, posting another double digit percent increase compared to last year was an exciting way to end March and it has me very pumped/excited to begin counting the dividends received in April.  Hopefully we can all continue to take care of business in 2018!  Now, let’s continue to side hustle whenever we can and do whatever we can to make every single dollar count.  Let’s keep on pushing everyone!