Happy New Year everyone!  It still blows my mind that the calendar has officially turned over and it is 2016.  HOLY COW!  I hope you all have had the chance to set your goals so we can hit the ground running in 2016.   It seems appropriate that the first article published on our website in 2016 is a review of the dividend income received during my favorite dividend month of the year…December.   Let’s take a look at my December dividend income summary, my final report of 2015!

There are many reasons why December is my favorite dividend income month.  First, the majority of companies pay dividends in the third month of the quarter.  Basically, it feels like we are receiving a dividend check each morning…which is an amazing feeling.  December 10th is particularly a fun day.  No clue why, but I received dividend checks from five companies on this day.  If anyone knows why this day is popular versus others, please let me know.  Second, mutual funds pay out their capital gain distributions during the month and our income figures receive a HUGE jolt as a result.  I’ll dive more into this later.  Third, and here is my favorite reasoning.  December is the only month of the year where I have a chance to actually receive more dividend income than Lanny!  I own one semi-annual paying Vanguard fund, VWNAX, and the massive dividend/capital gain distribution allow me to compete with Lanny despite the fact that his portfolio is nearly 3x the size of mine.  In December, Lanny received $1,078 in dividend income, which is an insane figure.  Amazing job Lanny.  Let’s see if I could defeat him for the first and final time in 2015. 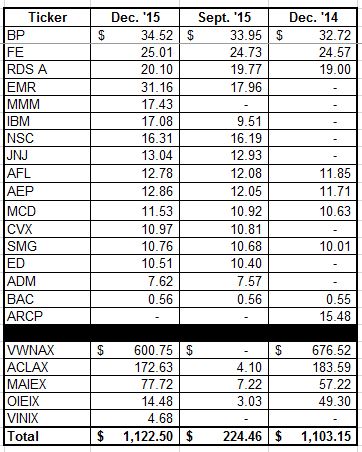 In December, I received $1,122.50 in dividend income.  For all of you that weren’t sure, I thought I would take the opportunity to point out that $1,122.50 is greater than $1,078….so take that Lanny!  Kidding, kidding.  Since my income is heavily aided by capital gains distributions from mutual funds, I split the table above into a stock and mutual fund section to better demonstrate the income received from each source.  I’ll start first with a brief discussion about the stocks.

The thing that jumped out to me about the YOY increase in dividend income attributed to stocks is that I received dividend income from four new companies compared to last December.  Ironically, one of additions was from Johnson & Johnson, which has found its way onto nearly every stock screener or “Top 5” list we have generated over the years.  You don’t earn the label as a foundation stock for no reason after all, right?  Can’t have enough of JNJ.  Another one of my favorite additions is ADM, which Lanny just purchased and is one of the stocks on my December watch list.  I only receive $7 quarterly from the company. The only question I have to keep asking myself is why haven’t I added more yet, especially considering the company’s recent decline?  Maybe I’ll follow Lanny’s lead on this one and just bite the bullet and purchase the darn stock.    While the quarterly growth in dividend income isn’t nearly as exciting as the annual growth, there were some exciting nuggets I wanted to highlight.  I received my first dividend check from 3M (MMM), one of my favorite stocks outside of JNJ.  Earlier in the year I initiated a large position in my portfolio and couldn’t be happier.  I consider this stock one of my “Always Buy” stocks and could possibly look to add to my stake in 2016 if the market presents a perfect opportunity.  In total, my dividend income from stocks increased 20% from September 2015 and 85% from December 2014!  Woah has this been an action packed year and it looks like 2016 will be the same way.

Now… on to the mutual funds.  What’s funny is that my income from mutual funds actually decreased 10% compared to December 2014!  Quite frankly, I have spent a lot of time reviewing my portfolio’s mutual funds and I’m ready to move on to the next topic haha   However, the snapshot of  income received from each fund above further validates my decision to sell three of my mutual funds: ACLAX, MEIAX, and OIEIX.  One of the main decision points was the inconsistent annual capital gain distributions, which can fluctuate as a result of the funds performance over the year.  In 2015, I saw my capital gains distributions decrease for two of my funds, ACLAX and OIEIX, and a slight increase from one fund, MEIAX.  However, the increase is actually minimal considering the fact that I received a boatload of new shares from the previous years distribution.  Anyway, the I’m thrilled that I was able to receive such large distributions from the company, but I am ready to begin receiving more predictable and steady dividend checks instead of relying on the lump sum payment in December.  Look at the disparity from December and September.  That’s what I want to avoid.   Realty Income…here I come!

Bottom line., I couldn’t be happier with the results and am so excited that I was able to sprint to the finish line in December.  Al joking aside, I love this month.  Between the constant dividend income, the holidays, time spent with the family, the reflecting on the year, and the looking ahead to the next year, there are so many positive things that happen in this month.  We all have been able to accomplish some amazing things during the year and have taken so huge leaps forward.  Let’s make 2016 and even better year than 2015 all!  Have a Happy New Year and let’s start 2016 off with a bang!