The air is getting colder, the leaves are changing colors, and the calendar is changing over from August.  This can only mean one thing…FOOTBALL SEASON IS BACK!  Fans are dusting off their jerseys and tailgating gear in anticipation of action returning to the gridiron.   There is a downside to being a hardcore football fan (besides for disappointment)…the cost!  Never fear, the Dividend Diplomats are here to share our frugal tips on how to enjoy football season and live frugal at the same time.  Yes it is possible!

Frugal Tip #1: Host a Watch Party Instead of Attending the Game

How many of you can hear your grandparents or parents talking about how they attended every game for XXX number of years and how they went to the coldest game ever for a chance to cheer their team to the playoffs?  In Cleveland that is the norm.  I love the atmosphere of attending the game.  There is no better feeling than sitting in a stadium filled with fans yelling, howling, and barking for your team.  But over the last decade or so a scary trend has been taking place.  Ticket, concession, beer, parking costs, etc. have been climbing at an alarming rate.  The NFL’s popularity has soared and the owners are milking every last dollar out of their passionate fans.  For me, it is no longer worth it.  Instead of incurring all of the costs, I have began hosting watch parties for each game.  Now, the main cost is food, which we spread equally over the party by having each person bring a different dish.  We still maintain the atmosphere of being surrounded by passionate fans, just in the comfort of our own home.  In my eyes it is the best of both worlds.

A third option exists for watching a football game besides attending the game or watching it at home.  Gathering a group of friends and watching the game together at a local bar.  Again, this is a great option.  You will find yourself surrounded by fans that you can re-create the stadium atmosphere with.  The one downside is that the bar can become quite expensive if you do not pay close enough attention.  Beers can cost $5/drink, appetizers can cost $6-8 per dish, and main dishes can cost anywhere between $10-$15 per dish.  So how do you avoid incurring these costs? Two easy methods are to limit the number of drinks you have while watching the game and to eat at home before you meet up with your friends at that bar. Limiting the number of drinks you have avoids the growing variable cost of each glass of beer while eating at home beforehand will prevent you from ordering too much food at the bar.   It is unrealistic to say don’t have any beer or food.  You are at a bar for over 3 hours for goodness sake.  The key is to control your limits and take actions to prevent you from having to order expensive items.

Alright fantasy football fans, this tip is geared towards you.  For the last month my TV has bombarded me with offers to switch to so and so network and pay for XXX football package that will allow you to watch all the NFL games at once!  The main selling point is that you can watch your fantasy football players in live action and track your fantasy team’s performance instantaneously.  These packages come with a hefty price tag (NFL Sunday Ticket is $240 in 2014!).  Why do you need this? Is it that important to have the ability to watch every single football game at once?  What happens if you want to attend a game and you spend a whole Sunday out of your house?  That’s a nice sunk cost right there.  What I am driving at is that you do not need to buy this package.   If you are really concerned about your fantasy team’s performance, then open your laptop and follow the other games online.  Now, I understand this cost if you are an out-of market fan.  If I lived in a city such as Los Angeles that would never show the Browns, then I would purchase the package so I could watch each game.  This tip is geared towards fans that are in-market and can watch their team on a local channel, unless you are like Lanny and cut the cable.

One lesson I have learned too many times in life is that you should never buy a new jersey.  Why have I had to learn this lesson?  The Browns have had 12 different opening day QBs  and have had 20 different QBs throw a pass since 1999.  Imagine the total cost if you bought a new jersey for even half of the supposed “franchise players?”  There is nothing wrong with wearing the previous year’s t-shirt, an old player’s jersey, or your 1980s sweatshirt covered with mustard stains.  I promise that no-one will judge you!  You can save a lot of money by resisting the urge to succumb to Johnny Football fever before he even takes a snap.  There is nothing wrong with wearing your original Bernie Kosar jersey from the 80s (For all of you non-Browns fans, Kosar was the last great Browns QB that played in the late-80s, early 90s).   Look how creative this fan is; talk about living frugally by example!   I will never forget the words my cousin told me when my childhood hero decided to leave for another sports team (No, it wasn’t Lebron for all of you who were wondering).  He told me that it is not about the name on the back of the jersey, it is about the name on the front.  For that reason, I will never pay top dollar again for any piece of clothing bearing one individuals name on the back. 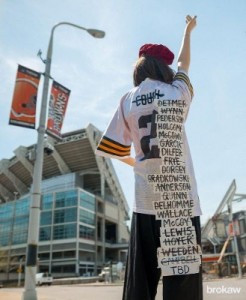 That’s it folks, those are our four frugal tips on how to reduce the cost of football season.  I would like to believe that the tips would not change your fan experience too much.  For me, being a sports fan is all about enjoying a game surrounded by other passionate fans.  What do you think of our four tips?  Do you have any other frugal tips for fellow football fans?