I thought the title may lure you in.  My hands are beat up and dirty after the work that I did on Sunday, September 17th.  Let’s just say, I can now officially be called an Italian, as mixing and laying concrete was involved.  I’m excited to tell you about how I was able to save over $2,000 on one house project that I ended up doing myself. 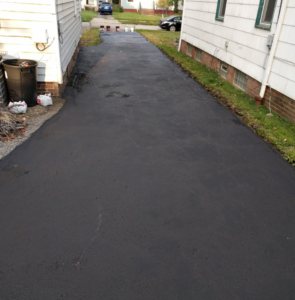 Well, my lovely suburb that I live in outside of Cleveland is interesting.  They strive to have beautiful homes and want to see everything in full blossom.  The city even provides signs titled, “Beautiful Home Winner”, in the front of homes that have earned such a prestigious (cough) title.  What they also are known for is destroying aprons to driveways during the winter with their snow plow, for one instance.  They have inspectors, as well, that troll through the neighborhood on a weekly basis to find out what’s wrong with each area of your home and will notify you via letter.  One such item, for example, was not having my address numbers large enough to be visible; so I now have my address numbers, almost a foot in height, screwed into the front of my house door to appease them.  Recently, they begun notifying me on two major items to fix.  Those two items were my broken/shattered/dismantled apron-end of my driveweay (See photos below, which includes the sunken right strip sitting 2-4 inches below the rest of the driveway) and to patch/seal my asphalt driveway.  Meanwhile, due to receiving an intense letter mid-August, I had to have this work completed for inspection no later than September 22nd. 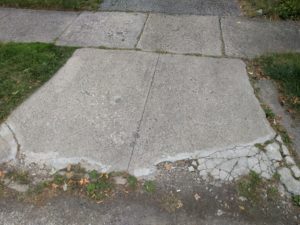 With these two projects, I wanted to receive estimates for the work, as I never had fixed a concrete apron or even laid concrete before, for that matter.  I thought you needed to have perfection/skill to even think about busting out the trowel, pails and what not.  So I reached out to, first, a guy that has done work at my house before that I trust/respect; a company that specializes in concrete and cleaning up driveways, as well as a local company.  The next section will break down their estimates on the house projects and their estimable figures were quite all over the place, to say the least.  I wanted an estimate that was honest, professional and could take care of the situation in a short fashion, all while not breaking the budget and draining the cash account.

The first individual, who has performed services at my house before, estimated that the cost would be $900 total and not including the materials needed to fix everything needed for my driveway.  This was purely labor cost and he stated it could cost a lot more, depending on the damage to the apron of my driveway and how badly my driveway needed the asphalt resealed – i.e. more hours for multiple coats, more hours dedicating to patch work and/or edging the driveway, the list goes on, for the potential of each additional hour, equating to additional labor costs.  Therefore, he said that was based on one day’s worth of work of approximately 8-10 hours and that if it was another day, that it could be double.  He also stated he wasn’t sure on how labor intensive the job was.  Once he stated that, I knew his experience wasn’t that “high” and I probably did not want to go that route on a moving expense target.

The second estimate was from an individual who had his own concrete, paving, driveway sealing  company.  Therefore, this was his specialized service and my house renovation was the bread and butter of what they do.  The gentleman, who owns the company, was very responsive and was able to come to look at the project at a time that fit my schedule.  This was nice and I was excited to see what his process was.  His company arrived at 9:00 AM on Saturday, the 16th, the check it all out, just as expected.  After 20 minutes of talking about the house and what was needed, he went to work at performing his estimate. After patiently waiting, he comes back inside and shows me the estimate… and my stomach almost came out the other end.  $2,355.00 was the total cost (see below) and that INCLUDED a $275 discount for his “Inventory” pricing of the asphalt sealer (I laughed so hard when reading that).  First, he spelled “off” wrong below and then, instead, took $275.00 off the bill.  Either which way, this was not the solution to my driveway project and I had to move fast on the answer.

You read that paragraph subject line correct.  The answer, with limited time, was to do it myself.  I ended up cancelling the third bid to come out, as he gave me a range in the same ball park as #1 and #3, so I knew it was time to do this one by the Italian hands that I have.  This meant a trip to Lowe’s was in the works.  Here are the supplies, listed from a few youtube videos, that I purchased: 160 lbs of concrete mix (quick strength) for the square footage I was repairing, 1 squeegee, 1 handle for the squeegee, 8 containers of asphalt sealer, 1 small paint brush, 1 bag of quick patch asphalt sealer, 1 gallon of asphalt liquid crack sealer, a trowel for spreading the concrete, concrete adhesive (to have the old concrete stick to the new), a garden hose (I didn’t eve have one yet), and I believe that is all.  How much did the total cost?  Well, it only cost roughly $246.00 and the pure dollar savings was $2,100!

My girlfriend, who is going to win an award for this, and I spent an entire Sunday on the 17th accomplishing this house feat.  The project included sweeping the driveway with a broom multiple times, power washing the drive with our hose, edging the perimeter, sweeping again and letting the water dry out to make sure we had a clean surface.  We then, after the initial dry time, patched any loose areas and laid in the asphalt crack liquid sealer as well.  While giving that an hour or two to dry, we skipped to mixing/making the concrete with the concrete mix and to start on the apron.  First, you also have to make sure the apron is clean, so we swept, edged and hosed down the apron as well.  Also, I have to say this now – this is the hardest work I have ever done in my entire life from a physicality standpoint (when we got to the concrete).  Then, after being cleaned, we applied the concrete adhesive.  To begin, we mixed, in a few gallon pail, the concrete by adding the recommended water to concrete mix and then, with a small hand shovel (advice: wear gloves) and slowly peeling the concrete mix towards me to mix it evenly.  After mixed evenly, I began laying the concrete down to raise the right side of the apron up; shoveling massive scoop down, after massive scoop.  Another piece of advice – wear a mask if you have it/something to cover your air intake.  Then, I took the trowel so smooth it all out and spread it evenly as I could over the appropriate level, to ensure it connects/grabs/adheres to it and to ensure that I was making it, reasonably, the right height.  I believe we used at least 1 of the 80 lb bags of concrete mix just for this section, if not a little more.  After we had that part complete, we finished off the bottom and cleaned/fix all of that up as well, giving it a solid finish that met the street and had a little lip of an inch.

We were dead, the fact that my girlfriend didn’t kill me is remarkable.  Using a paintbrush, she helped outline the perimeter of the driveway with the asphalt sealer and I was using the squeegee spreading and making my turns.  We finished 3/4 of the driveway (about 100-110 feet long) by 9:00 PM that night and we couldn’t lift a single limb.  We had to stop, due to needing more asphalt sealer, which I did pick more up and finished two days later.  Total project time was 14 hours and total cost of $246.00

Would I do this again?  Absolutely.  Would I try to do this all in one day?  Absolutely, NOT.  I believe what I could have done different was made a decision earlier to do it myself, to have more time to prepare.  I also would have called 2-3 people to see if they wanted to eat pizza at my house and help me, which would have shortened the overall work day in general and could have created a bonding experience at the house.  Given that I was able to save over $2,000 on the house project by doing it ourselves was more than worth it, as I didn’t have to tap the cash or investment cash fund.  This should allow me to stay on track to accomplish other goals and will still allow me to maintain a high savings rate, which I believe nothing matters more than that metric.  It would take a $60,000 investment at 3.5% to even earn the $2,100 I just saved.

I am very happy that I was able to save money, learn something new and go outside of a normal comfort zone.  I didn’t do the job perfectly, but I wanted to ensure the city was fulfilled and I know I can do better next time, if there is one.  The house has endless chances of having money going in that direction and this could have been far worse than what it ended up being.  I believe learning a few of these handy thinks for a house or even a rental property can do wonders down the line or even for someone else, as well, to save money or increase profitability on a sale or rental.  I hope the community doesn’t have any bright ideas reaching out to me for DIY house projects, as I’m definitely not the guy!  At least, not yet, that is.  To ask the readers – what would you have done?  Would you have done this house project yourself?  Would you have sealed your driveway and laid out the concrete?  Would you have hired a company to take care of the situation?  Did I spend too much on the materials?  Would love to hear your feedback, please share below!

Thank you again, for stopping everyone, looking forward to the comments as always.  Keep in mind, every dollar counts, and if that means doing it yourself (DIY), be smart, patient and plan that out accordingly.  Talk soon!