I think I have said this in every article I have written this year….I can’t believe how fast time is flying.  We are through one month of 2015 already.  It seems like yesterday I was just writing a post about my goals for 2015.  One of the most challenging goals was to defeat the Dividend Diplomats’ Savings Challenge 6 times this year!  Did I move one step closer to accomplishing this goal after January came to a close?  Let’s find out!

Bingo!  I defeated the challenge this month, bringing me closer to accomplishing what I see as my most difficult goal of the year.  Besides for changes in income and expenses (which I’ll summarize later), I had one major contributor to my success this month.  In his dividend summary article, Lanny mentioned that us CPAs are working long hours as we are in the heat of our busy season.   For me, January was filled with traveling and working some late hours.  I never hit 70 hours like Lanny, but I was pretty freaking close one week.  The nice thing about traveling for work is that all of your expenses are covered, so I do not have to pay an out-of-pocket expense the second I begin the trip.  This month I was gone over 3 weeks…that’s a lot meals that I did not have to pay for.  Secondly, since we are working long hours, there just aren’t as many opportunities to spend money as I am either too tired to go out on the weekends or I cannot take the time to go out to dinners during the week.  These factors were major contributors to my success for the month, but it doesn’t come with the major downsides of being away from family and friends.  But for now, I’m very pleased that I was able  leverage my situation to accomplish this difficult feat.  Let’s dive into the details with how I was able to accomplish this.

What’s funny is I actually had a decrease in income for the month.  My dividend income decreased from over $1,100 in December to only $80 in January.   Holy smokes!  That statement just hit me.  I lost over $1,000 in dividend income for the month and I was still able to save over 60%.  Luckily I was able to offset this loss with a new source of income, one that brings me closer to one of my other 2015 goals of finding $1,000 of “other income” during the year.   In my goals article, I challenged myself to find additional sources of income because I wanted to both diversify my income sources and continue to scrape money together so I can get my dividend income snowball rolling as early as possible.  Here is how I was able to add additional income this month.

In 2014, I purchased a Samsung Tab S and I had these grand visions of using this as my one-stop shop for blogging, reading, etc.  What was fun about the tablet purchase was that I challenged myself to earn the funds to purchase the tablet.  So I would shop online to earn cash back, earn as many Amazon gift cards as possible from Swagbucks, and asked for gift cards for my birthday and at work so I could find a way to purchase the table with $0 out-of-pocket.  It took six months of saving, but I was finally able to save enough and I purchased the tablet.  However, as time went on, I found myself using it less and less and the tablet soon became an expensive electronic that I would use for maybe 5-10 hours a week.  Not at all the laptop replacement that I thought I was getting when I made my purchase.  Luckily for me, the Tab S was still the most recent tablet released by Samsung so it still had a lot of value.  I made a quick decision to sell the tablet for $325 in order to maximize my value and I haven’t looked back since.

But my accumulation of other income didn’t stop at selling the tablet.  I also upgraded my phone at the end of December.  Instead of trading in my phone to Verizon for store credit (Which forces you to buy their over-priced accessories), I decided to roll the dice and sell my iPhone online.  After several failed Craigslist ads, I decided to trade my phone into Amazon for a gift card for $175.  I have much more flexibility on Amazon and since I use the online giant a lot, it’ll be a nice offset to future expenses.  This brings my other income tally to $500 for the year.  One month into 2015 I am 50% of the way to achieving my goal.  Even though I liquidated some valuable assets, I know that through creativity and hard work I will be able to reach $1,000 by the end of the year. 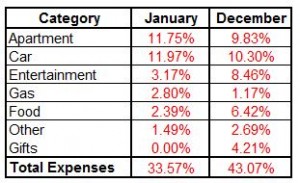 As I mentioned earlier in the article, this is about as basic of an expense for me as possible.  I just didn’t have the time to spend, which isn’t necessarily a bad thing. The only night of significant expenses is when we celebrate my mom’s birthday.  My sister and I treated her to a nice dinner and a comedy show, which is always a gamble.  Luckily for us, the comedians were great, their jokes were appropriate (Which is a big deal considering I was at the show with my mom!), and the dinner was delicious!  It was a great evening and a really fun way to celebrate her birthday.  Outside of that,  my expenses were predominately from fixed expenses such as rent, utilities, cable, and my car.  Overall, a pretty good month for me and it was exactly what I needed in a month that saw my total income decline.

So far, I am shooting 100% this year for defeating our 60% Savings Challenge.  Not only was I able to save a significant amount of my paycheck this month, 66.43%, but I was able to make some progress with two of my 2015 goals.   Hopefully I will be able to keep the momentum rolling for the next 11 months of the year.  It won’t be easy, but I am working towards building a solid framework for consistently achieving 60%.  I cannot wait to see what the rest of the year brings me.

How did you perform this month?  Did your 2015 start off better or worse than your 2014 ended?  Any other suggestions on how to make $500 of additional income throughout the rest of the year?