May 2016 was  the best month of my life…hands down.   And it had absolutely nothing to do with investing.   I’m sure those that have been following along can guess what happened.  If not, no worries, I will have some blog posts soon to fill you all in on what exactly happened soon.  It was also a great month for dividend income as I saw some growth compared to May 2015.  Let’s take a look at the dividend income I received during the last 31 days!  Here is my May 2016 Dividend Income summary!

This month, I received $170.19 in dividend income, which is a 33.46% increase from May 2015.  The chart below shows the details.  the total dollar amount of income trails Lanny’s month of May by about $100; however, we both posted comparable growth rates as we both were around 30%.   The chart below provides a detailed breakdown of my dividend income for the month. 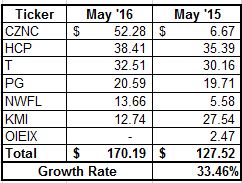 Well, it doesn’t take a rocket scientist to figure out the catalyst of my dividend growth rate during the period.   It must have been the change in OIEIX, which I sold earlier in the year…..KIDDING.   No, the increase was due predominately to my increased stake in Citizens and Northern Bank (CZNC), which I have purchased twice in the last twelve months.  The nice thing was that Lanny and I timed our recent purchase of CZNC with the ex-dividend date to make sure that we captured the May dividend.  Now you can see why we were so keen on buying before the ex dividend date.   This last purchase of CZNC added ~123 shares to my position, adding $32 to my quarterly dividend income.  Without this buy, I would be staring a single digit dividend growth rate in the face.

My increased stake in CZNC allowed me to fight off negative headwinds for the month.  As we all know by now, KMI slashed their dividend 75% at the end of 2015.  I’m not upset about this decrease anymore as the company is on sounder financial ground than it was pre-dividend cut and I like the company’s long-term prospects.  The other negative decrease was from when I sold three mutual funds at the end of 2015 and stop collecting the pocket change that OIEIX threw my way every month.  That money was invested in CZNC and PFE in 2016, so I think I did pretty well for myself with those moves.  Thank goodness the negative headwinds were not stronger and as bad as they could have been!

I wanted to try something different this month, so let me know what you all think of this brief section.  I thought it might be a good idea to show how my overall portfolio performance against the S&P 500 and the Dow Jones.  We always focus on income growth in our summaries, so why not look at how well your portfolio performed against the broader market.   Overall, my portfolio’s % gain increased 3.4% during the month.  This was measured by taking my increase in market value less increase in cost basis for the last two months; this figure includes the impact of stock market appreciation and re-invested dividends.  Then, from there, I backed out the $170 in re-invested dividend income earned during the month to arrive at the true increase in value due to stock market appreciation.  This total increase equated to 1.14% during the month, which was in line with the S&P 500’s increase of 1.5% and ahead of the Dow Jones’ increase of .08%.  However, I would hardly call this a major victory.

Similar to my April 2016, this was a boring month for investing.  With only one major stock purchase, the majority of my other dividend increases were a result of dividend re-investment.   There is nothing better than seeing the power of dividend re-investing working its magic, right?

Did you have a nice month of May?  Do you think comparing my portfolio’s performance against the major indices provides and value?  How well did your portfolio perform during the month?  Did you receive any dividend increases from companies during the month that were noteworthy?