I’ve been getting excite to write this post ever since I published my November 2016 dividend income summary.  Why?  Because December is the BEST DIVIDEND INCOME MONTH OF THE YEAR!  Not only do we receive dividends from the majority of companies in our portfolio, but we also receive distributions from our mutual funds.  More often than not, the capital gains distributions cause you to fall out of your seat as the number never seems to disappoint, especially when you have been contributing to your 401k throughout the year.   Now that it is officially 2017, time for me to perform my final dividend income summary of 2016!  Let’s see my December dividend income figures!

In December, I received $1,176.30 in dividend income, which resulted in a 4.79% increase compared to the December dividend income I received in 2015.  This is a bitter-sweet total for me, because I couldn’t be happier in the income levels received.  Unfortunately though, my streak of topping Lanny in December has officially come to an end as he posted a ridiculous $1,680.33 in dividend income this month.  Congrats on the awesome month Lanny and I”m glad to see the positive results of the portfolio strategy adjustment from earlier in the year!  Maybe this defeat will motivate me to get of my seat and step up to the plate in 2017.  The following table provides a summary of the income received from each holding this month: 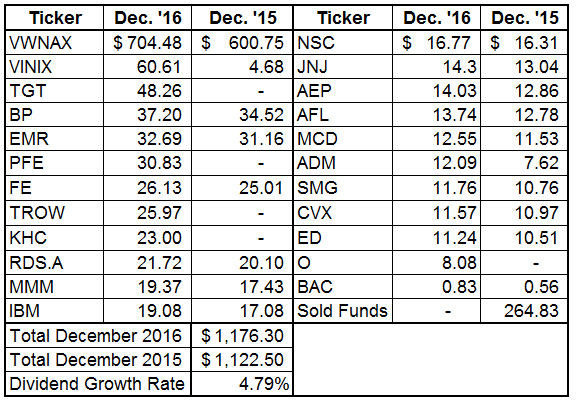 The table above shows paints a great picture and does a great job highlighting the major portfolio changes that occurred in 2017.  While I won’t summarize every one of them in this article, here are some of the major highlights and things that get me excited about what transpired in December.

My growth rate wasn’t the best, but I’ll never complain about receiving four figures worth of dividends in a month…how could I??  Seeing months like these serve as the best motivation to continue down this path.  One thing I forgot to report was the total dividend incomes received in 2016.  With this month, my final count of dividend income in 2016 was $3,478.09, an increase of 4.41% compared to my 2015 total of $3,331.16.   nearly $3,500 of truly passive income, where I didn’t have to lift a finger to earn it.  Putting your money to work for you, that’s the name of the game here.

I cannot wait to see what 2017 has in store for me, Lanny, and all of us in the dividend investing community.  There are so many exciting story lines and things to follow and stocks to monitor during the upcoming year.  Where will the stock market go from here?  What companies will increase their dividend?  Plus, now that my wife and I are going to report our stock portfolios as one versus tracking them separately, I cannot wait to publish our first combined report in January!  Our goals are set, we are ready to roll.  So everyone, let’s work to make 2017 one for the record books!

How did you December unfold?  Was percentage of your income was attributable to mutual funds compared to individual stocks?  How many new companies paid you a dividend in December 2016 compared to December 2015?